Weekend on the Mekong, Part 2

Posted on August 1, 2012 by CompassAndCamera 3 comments 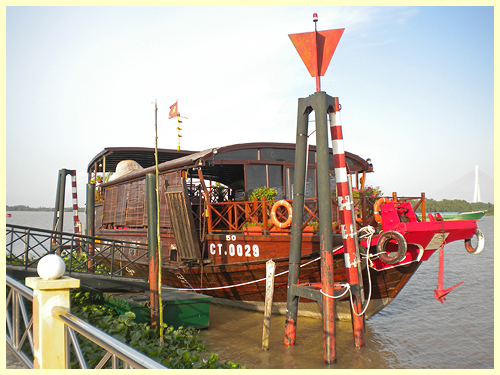 Sunday morning we arose at the excruciating hour of 6:00 a.m. to cruise the Mekong to the floating market. We had not slept well — an army of mosquitoes had entered our room through a deck door that had been ajar (yet was hidden by the curtains). We were both bitten, and in the wee hours Mr. Producer turned on the lights and started waging war against them, jumping on furniture with furious swats and thuds against the walls and ceilings. It must have sounded like a bar fight in our room. But it had to be done — we’ve already encountered Dengue Fever once in Vietnam, and neither one of us wants to go through that again.

Out at the river’s edge, we boarded the boat — with breakfast provided while floating down the river. What a fantastic way to see Can Tho’s morning come to life on the Mekong. With the sun rising and the breeze blowing, we sipped coffee and watched the world drift by. 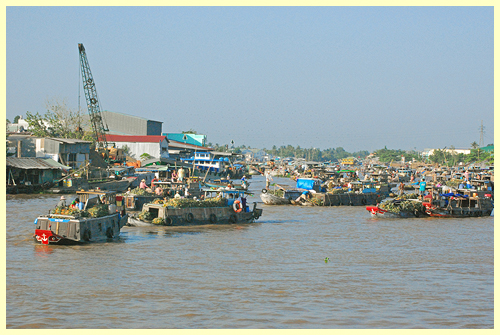 Apparently, it was a holiday during the weekend we were in Can Tho — yet we were never quite able to figure out or understand what holiday was going on. We had been warned a couple times that the market wouldn’t be busy, but as we approached it seemed there was still quite a bit of activity taking place. Boats of all shapes and sizes were shifting around and cruising the river with their loads on display. When we had floated past the whole market, we transferred to a much smaller boat so we could maneuver back through the morning bustle and get a closer look.

Each boat was piled with a particular type of fresh fruit or vegetable, advertised at the top of a tall pole attached to the side of the boat for everyone to see. Buyers seeking that product would simply dock alongside that boat and work out a deal with the seller. 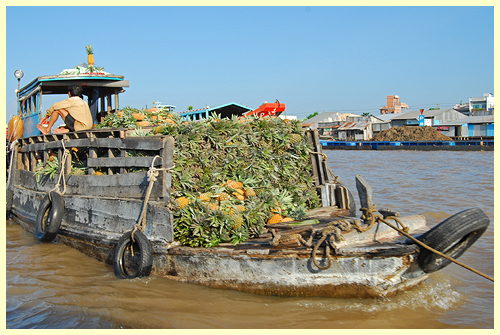 We came across a boatload of pineapple, literally. In the midst of shooting photos, a speedy boat helmed by a mother and son pulled up next to us offering pineapples and bananas in perfect ripeness.

One of the most interesting parts of the morning came next. We left the main arm of the river and ventured down a smaller tributary to see a banh trang, or rice paper, “factory”. Factory isn’t quite the word I would use… operation, maybe. The whole operation was taking place under the roof of an outdoor hut. The Banh Trang Maker begins with a thin mixture of water and ground rice.

There were no measuring cups or buckets, nor anything exact about this process. The Banh Trang Maker simply stirred the mixture and added more water or ground rice based on consistency and experience.

Using the bottom of what looked like a frying pan, he spread the mixture on a piece of material stretched over a pot of boiling water. This was covered with what looked like an upside down wok, and left to steam for about 30 seconds. 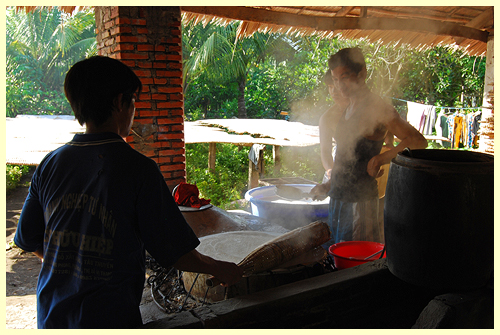 The Banh Trang Assistant uncovered the steamed rice paper and, using what looked like a small straw bat, deftly lifted the paper off the cooking surface.

Then he transferred the rice paper to the drying racks, never once dropping or putting down his cigarette during this whole amazing process. The racks are made of woven fiber of some kind, and stacked on top of each other until they’re ready to be carried into the sun where they’re elevated and placed side-by-side to dry the rice paper.

You just have to hope that the rice paper holding together your delicate, flavorful Vietnamese summer roll hasn’t been drying on this dog-eared rack.

Next, we went to an orchard where we saw a veritable tropical fruit salad in its native environment — starting with pineapples. Do you know… to grow a pineapple you start by planting the top of another pineapple? Pretty simple, and apparently pretty easy to grow. I may try this on our balcony.

These Rastafarians are actually dragonfruit trees! Look closely and you can see the beautiful pink fruits hanging from the stringy green bits. Wild and wacky — the world of Dr. Seuss does exist in reality, my friends. We also saw jack fruit, lychees, rambutans and papayas.

We returned to the river and began working our way through the maze of waterways back to where we started. And this is where my commentary gets a little more serious. 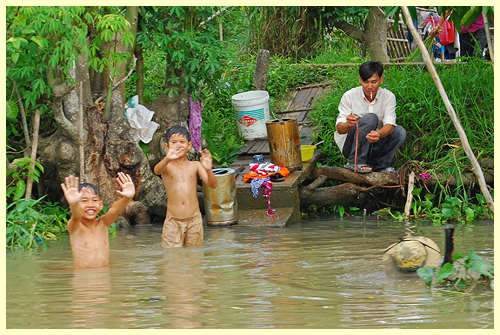 At times there is beauty along this river, but conditions along the Mekong are generally extremely poor. Some homes are barely held above water. Some homes have visible sewage drains opening directly into the river. Walls and roofs are fashioned together in a rusty patchwork against the tropical storms that frequent the region. Most disheartening (at least to me), the trash in the river and on the riverbanks is astounding, saddening, deplorable. Quite simply, I’m pretty shocked at the state this river is in, and the economic circumstances of the area are not helping.

Traveling sometimes leaves more questions than answers, and that’s certainly the case since visiting the Mekong. When and where does care for this environment begin? Does it begin the with government, which needs to address the failing health of these waterways and provide infrastructure for its people? Does it begin with individuals, who need to understand the connection between their health and the health of the river? Does it begin five or ten years from now when the river is so filled with trash that fish populations are decimated and food becomes scarce, and people have no choice but to clean up the mess? I don’t know.

It sounds silly, but I wish I had a million dollars and a trash company in the Mekong. I would give every kid in the region a penny for every plastic bag or piece of trash collected from the river. With the current state of the river, I venture to guess I would be out of money in about one day. It doesn’t sound like a lot, but for a kid in these conditions to make a couple bucks from a couple of hours of work to make the Mekong cleaner could be a win-win for everyone. So maybe that’s where it begins… with money and an idea and the desire to make the world a better place.