Posted on December 31, 2012 by CompassAndCamera 32 comments 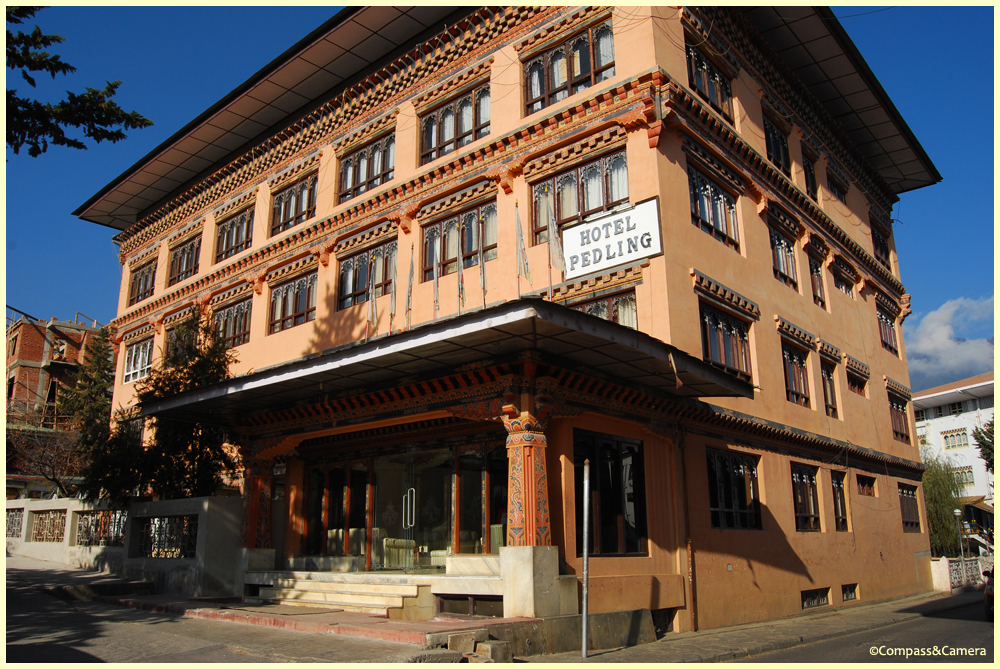 We departed Hotel Pedling around 8:00 a.m., passing through the center of Thimphu. Bhutan has no traffic lights — not even one — so the country’s busiest intersection is controlled by a white-gloved policeman who stands at a kiosk and keeps the traffic moving. We followed his signal and passed through the roundabout on our way to the weekend market.

The market is adjacent to the Wang Chhu river running through Thimphu. Before we entered the market I noticed a staircase to a bridge crossing the water. We climbed up the stone stairs to a white brick tower with a blue and orange flower motif on the interior and exquisitely hand-painted mandala on the ceiling surrounded by swirls of indigo. Post and lintel timbers framed the opening to the bridge and morning light filtered through string upon string of multi-colored prayer flags. A peek through the flags revealed a placid view of the river, flowing south toward India. These are the discoveries that make Bhutan such a special place — artistry, thought and beauty in the most unexpected locations. 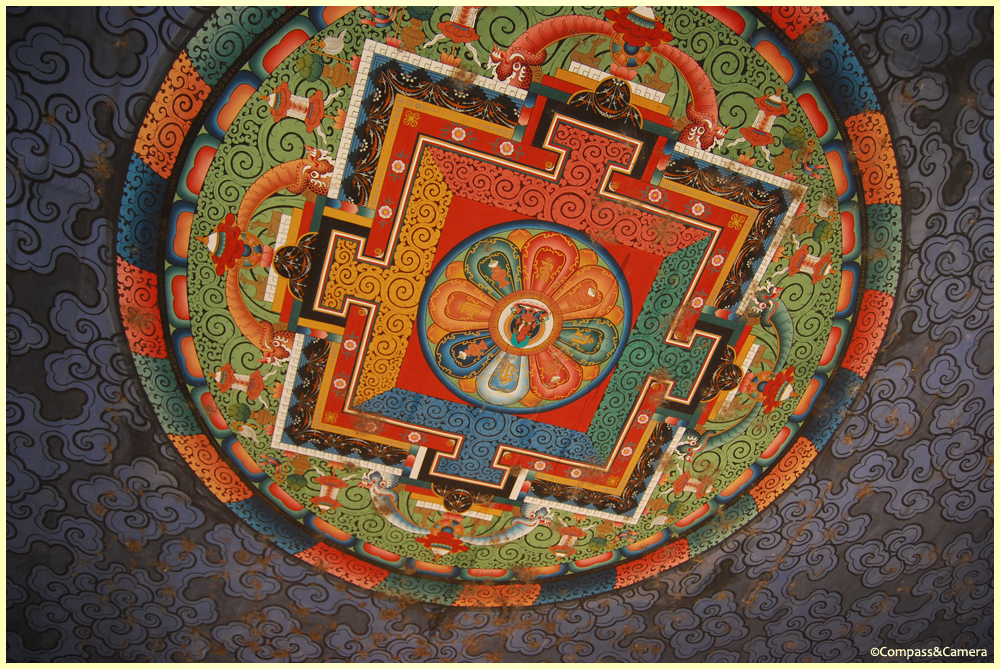 Crossing the bridge, we found an outdoor craft market with treasures from around the region — printing blocks, decorative boxes, wall hangings, singing bowls, masks and tribal jewelry . I bargained (poorly) for a jewelry box beaded with red coral and turquoise. The seller smiled and offered a small discount — I was her first sale of the day and a sign of good luck. She agreed to a photo in return.

Back across the bridge (what a photographer’s dream), we entered the Centenary Farmers Market. Housed in an open two-story structure, vendors displayed their produce at yellow concrete stalls. Fruits and vegetables were on the ground floor — green beans, eggplant, potatoes, tomatoes, cucumber, lettuce, cauliflower, carrots, ginger, garlic, apples, oranges, bananas.

A couple of adorable little girls eagerly struck an informed pose for a photo. The thrill of a digital camera is new to a lot of people in Bhutan, and kids seemed happy to pose and smile for us in exchange for a look at the photo (although these two scurried off as they giggled). 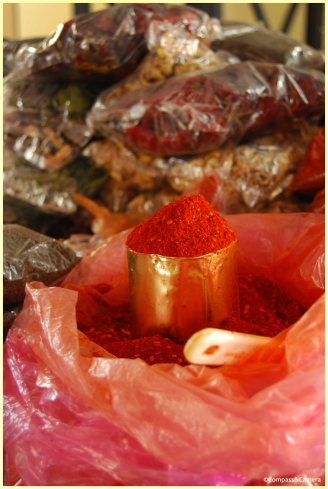 There were chili peppers everywhere — piles and piles of chili peppers! Red, green, fresh, dried, crushed and powdered into a fiery red dust. Thick, black sausages were stacked on a shelf like limp tire tubes. Dried yak cheese hung from strings, while dried fruits and nuts sat in open sacks. Another part of the market housed a muted palette of grains and rice. It was a Saturday morning scene like so many others in the world — people out to make some money, socialize and do their shopping for the week. 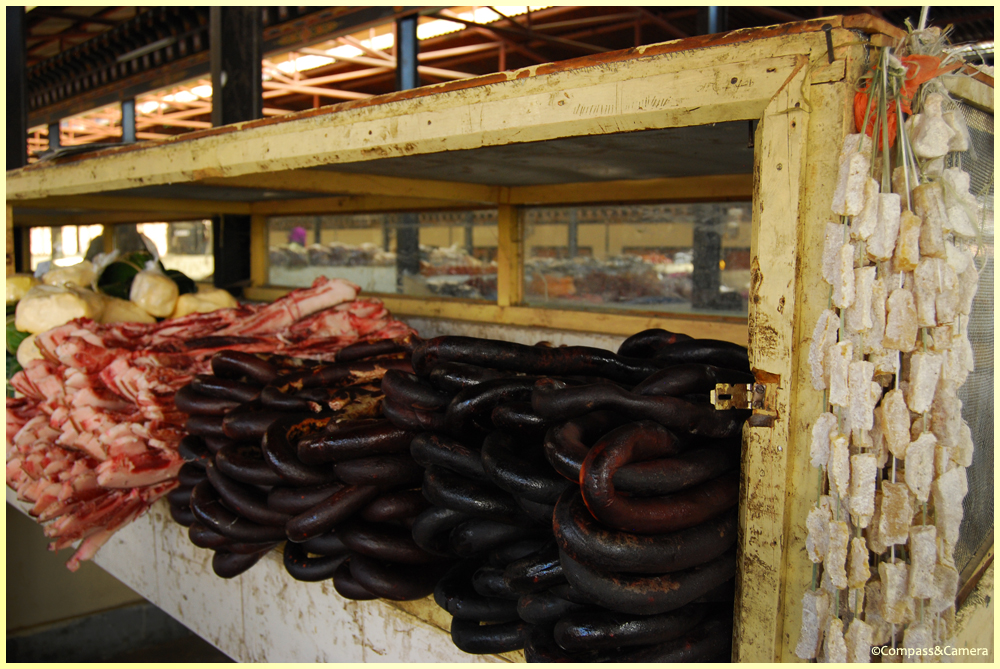 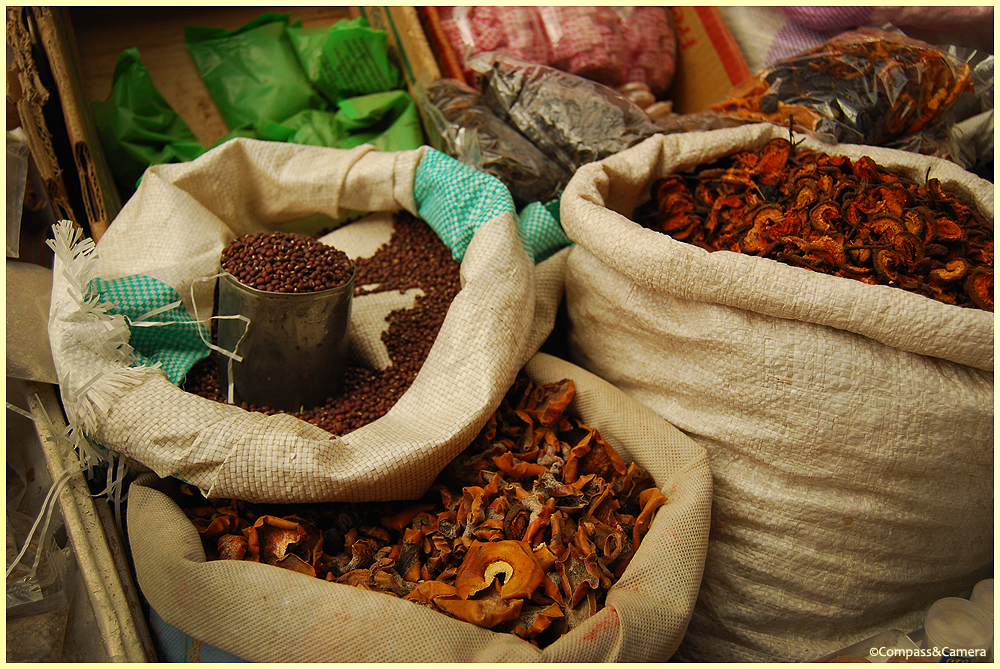 It was time to depart Thimphu for the Punakha valley. I bought a bag of mandarin oranges and we returned to the car. Leaving Thimphu, I spied one last view of the sitting Buddha (top right on the hillside) before we started up the road to Dochula Pass. Like so many “one and only” things about Bhutan, there is just one road going east and west across the country. And it is just that — a road, not a highway. It started out paved but twisted erratically up through the mountains with patches of dirt and mud. Barely wide enough for two cars to pass, the importance of having a good driver became very apparent. His skill and attention were the only things saving us from the trucks passing on the right and the precipice on the left. Think twice before you embark on this road — fear and car sickness are frequent companions.

The top of Dochula Pass (3,140 meters or 10,300 feet) welcomed us with a grand display of 108 white chortens, built in 2005. A short hike to the top of the hill revealed a northeasterly view across the valley to a cyan sky partially filled with shifting cumulus clouds. On a clear day you can see Bhutan’s Himalayas, as we would discover on our return.

We descended the mountain toward Punakha. Recently harvested rice fields stepped across the valley toward small clusters of two-story homes. We stopped for lunch at Sopsokha, laughing at the phallus handicraft store with its wooden souvenirs of every size. Phalluses are serious business in Bhutan — hanging from the corners of roofs, painted on walls and to the left and right of front doors of many homes.

After lunch we set off by foot from Sopsokha to Chimi Lhakhang, or the Temple of the Divine Madman. The sun reached the western sky as we walked a wide road to the east side of the valley. 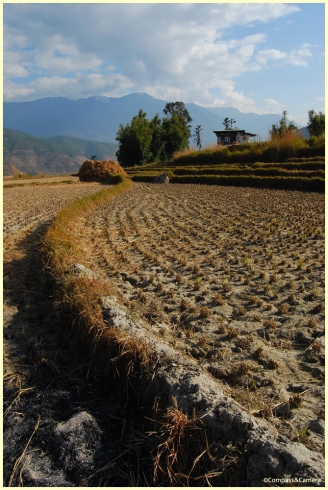 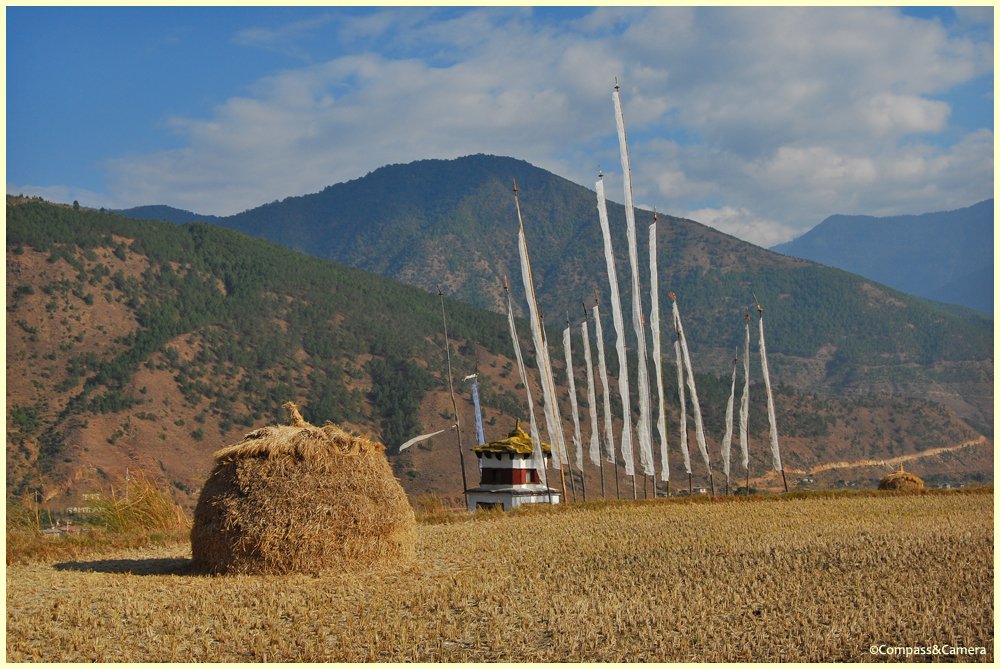 Harvested bundles of rice were carefully stacked in circular mounds like pumpkins with stems on top, each golden bundle waiting to be manually whipped against the ground to release the grain. Daily life in Bhutan was yet again on display in a pastoral scene of incredible beauty. Walking uphill, we reached the temple where Kinga gave us a quick tutorial on the history of the Divine Madman. 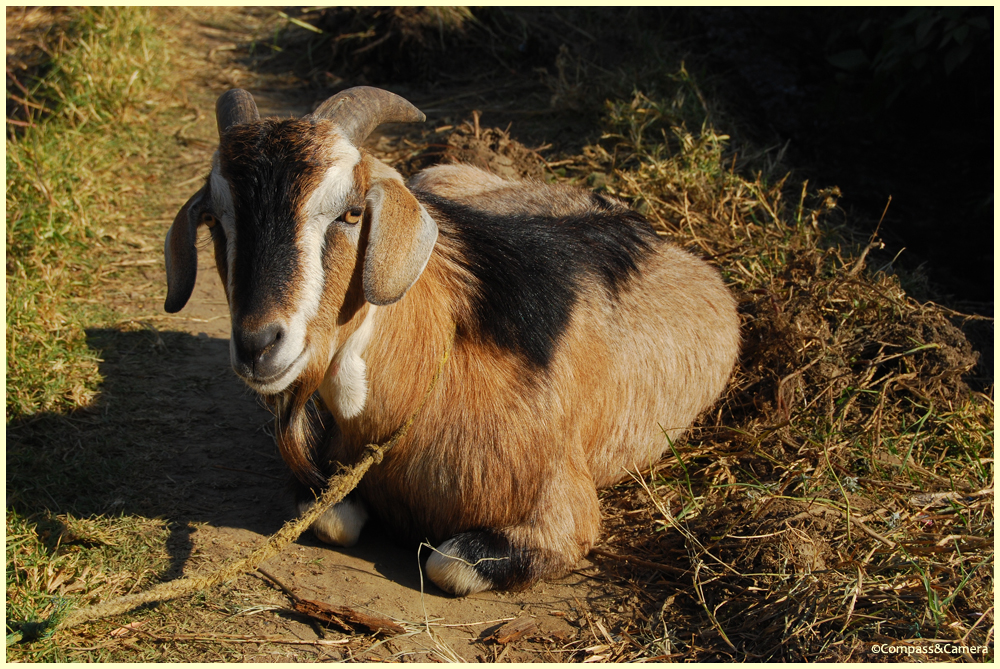 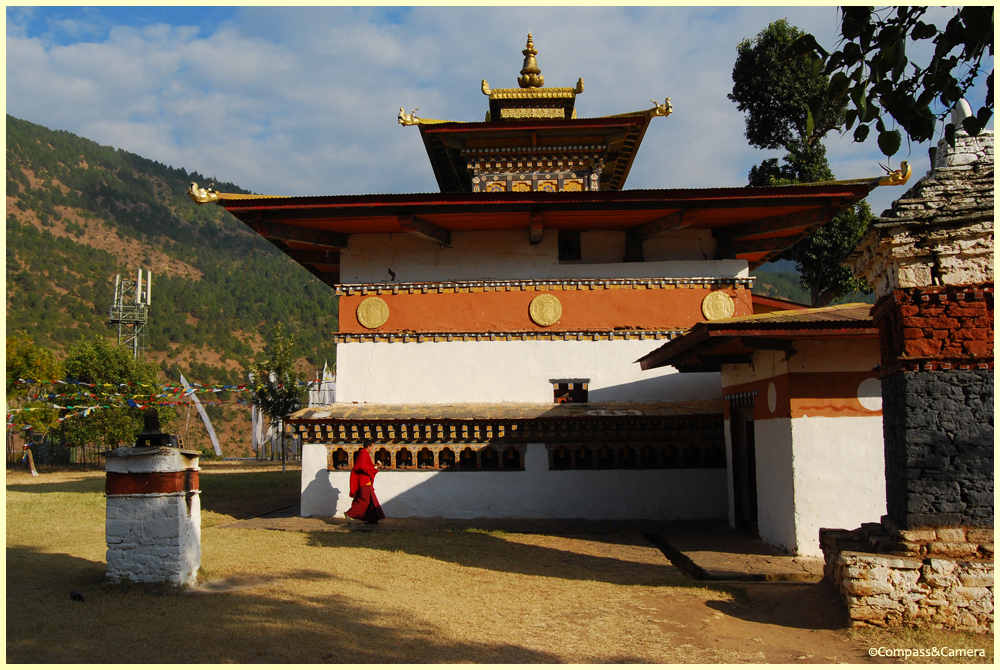 Lama Drukpa Kunley (born 1455) is known in Bhutan as the Divine Madman and creator of the takin (see Day Two’s adventure). He used his “Thunderbolt of Flaming Wisdom” to turn demonesses into deities, hence Bhutan’s abundance of phallic imagery and statues used to ward off evil spirits. His antics and exploits are legendary, and supposedly he enjoyed the company of hundreds of women thus the Temple of the Divine Madman is known as a temple of fertility. We turned the red prayer wheel at the entrance and toured the small interior where I made an offering of 20 nu. I was blessed by a monk who touched my forehead with 10-inch wooden phallus. Only in Bhutan. 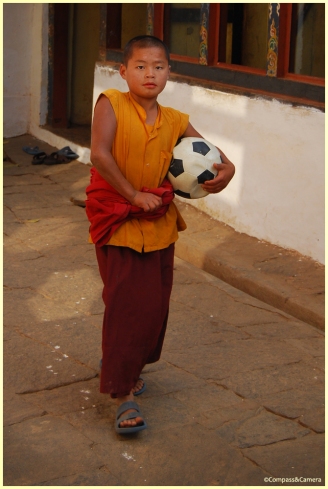 From the interior courtyard, we watched young monks reciting prayers in a small room while another walked past me with a soccer ball under his arm. Here it was in Bhutan, the world’s most beloved sport with destiny and fortune at the whim of a black and white leather ball. Outside the temple the boy kicked the ball on the hillside. Does he yearn to be the next Messi? Or does he play to pass time, simply for the love of the game? 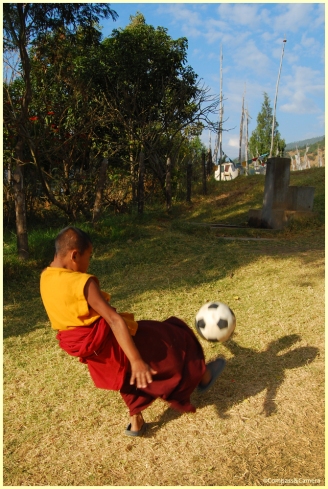 Farther down the trail we passed a trio of women peeling a bag of oranges with their backs turned toward the sun. We walked past hanging laundry, stacks of firewood and doorsteps filled with the sandals of the occupants inside.

Kinga led us into a small hut where a woman was toasting rice to make candy. She stoked the fire and stirred the skillet, and laughed when I stopped to photograph the heart-shaped lock on the door. Another two hours in Bhutan, another layer of life in this quiet, peaceful country. 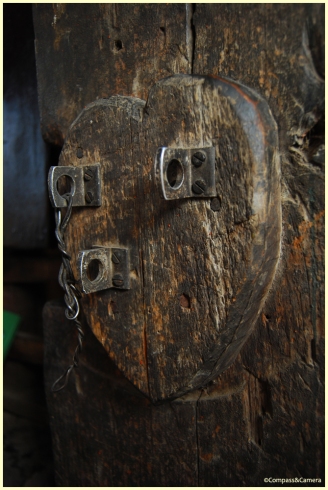 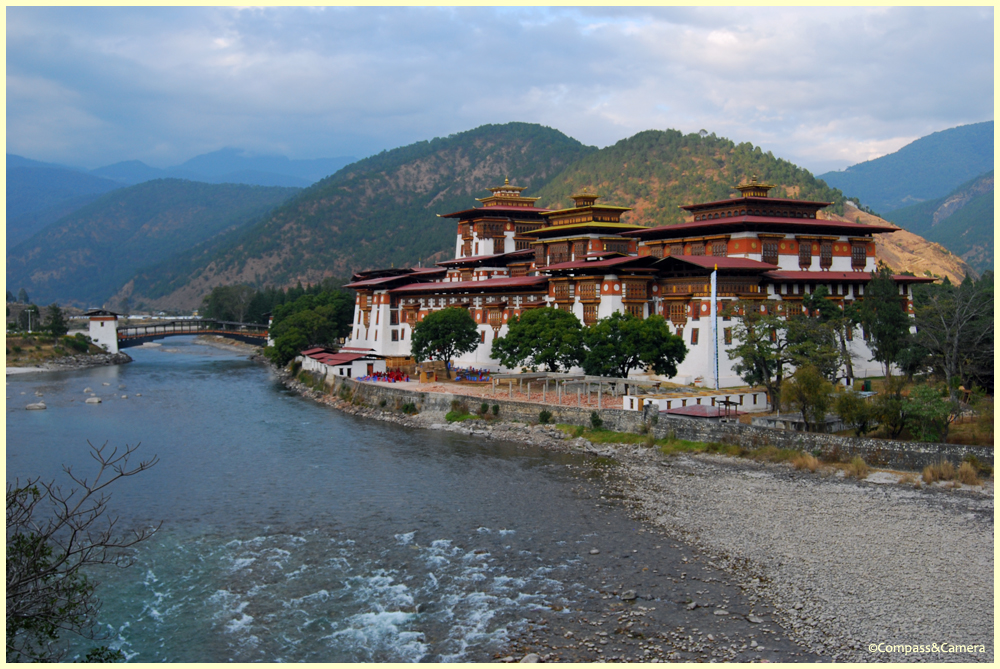 Thirty minutes further by car and we arrived in Punakha — just after the sun had moved behind the mountain ridge to the west, casting shade over the valley. The Punakha Dzong stood proudly at the edge of the river against a backdrop of bluing mountains. Monks dressed in red robes gathered for dinner on the west side as we marveled at the site. We would return here in two days and tour the dzong on our way back from the Phobjikha valley. Until then… dinner, sleep and the promise of black-necked cranes in the morning.

Next: Day Four in Bhutan

Costa Rica vs. Germany! (Can you tell?) North of Doha at Al Bayt Stadium, designed like a Bedouin tent to welcome all. And it’s an ALL-WOMEN referee team tonight! #qatar2022 #worldcup #travel
Fireworks and drones last night from the Corniche #qatar #qatar2022 #qatarworldcup #travel
Turn on that television! Fire up that WiFi! It’s US vs. IRAN!!!! #worldcup #travel #goodwill #womenlifefreedom
The National Museum of Qatar :: From the architecture to the cafe to the exhibit to the view from the Alain Ducasse restaurant, this was a fun way to spend a few hours learning about Qatar’s history, nomadic people, pearl diving, oil discovery and master plan for the future.
Loading Comments...
%d bloggers like this: