Cowbells & Caravans: How to Tour with the Tour de France 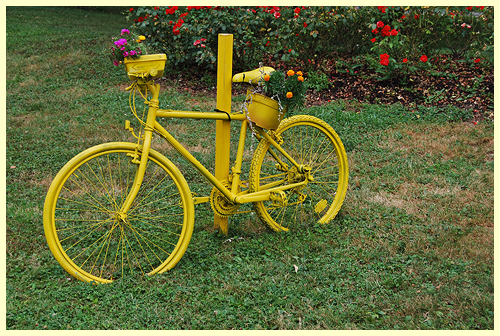 It’s summertime and I’ve been in the U.S. working for the past three weeks, leaving my blog stagnant and unattended. So hey, why not share a timely post from the past? The 2014 Tour de France is currently pedaling its way toward Les Alpes. Here’s a post from 2012 about the race, the party, and what makes The Tour an epic travel experience.

It’s April 30th. Do you know where your summer vacation is? If you live in Europe or you’re a cycling fan, maybe you do. If not, listen up. It’s called the Tour de France and it kicks off two months from today. 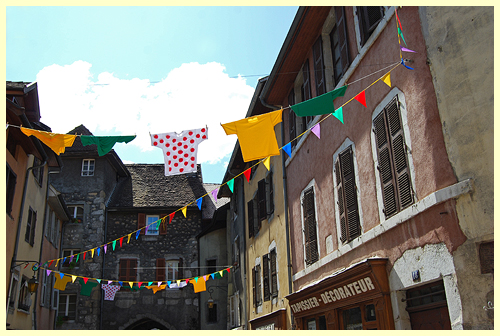 Do you love sports? Do you love cycling? Do you just love to ride a bike? Silly questions… of course you do! Just had to make sure I was speaking to the right audience before I justify my almost irrational claim that the Tour de France is, in fact, The Greatest Annual Party in the History of World Sports. If you like cycling, mountains, France, road trips, baguettes, cheese, wine, beer, camping, cowbells, socializing with happy people from around the world and never having to buy a ticket for a three-week-long sporting event (or even just ONE of these things)… then GO to FRANCE in JULY.

During the month of July, all of France is crazed and excited about cycling — a fact understood and accepted nationwide. This goes a long way in how you’ll be received as a spectator of the race and participant in The Greatest Annual Party in the History of World Sports. French people look forward to meeting you and welcoming you to their country. They let you camp on the roadside, they do their best to keep the traffic moving, they expect that you’ll respect their terrain and the riders who are cycling past you and, most importantly, they don’t try to control an event that has a life and spirit of its own. 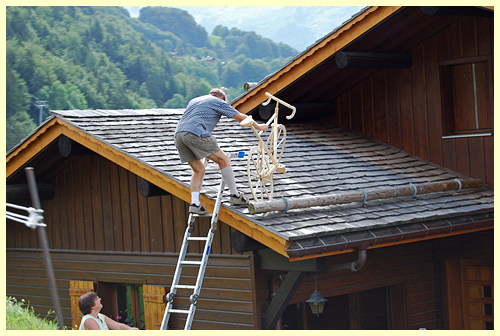 Putting out the bike on race day

That’s really the best thing about this race and this party: the freedom. You go because you love it, you don’t have to follow a strict schedule or spend a lot of money (unless you want to), there are few rules or regulations about where you can or can’t spectate, and in the process of touring with The Tour you get to see the charming towns and stunning scenery of France, like this stop on our route in 2009:

So how do you tour with The Tour? Here’s what I recommend: get a good map, review the race route, focus on one week if you have limited time (we’ve picked the mountain stages in the Alps twice so far), rent a car or a camper van (satellite TV optional), fly into Geneva with your camping gear, pick up the vehicle, arrive at the first stage on your itinerary the night before it happens, find a place to park, make your campsite and let the party begin. You’ll be surrounded by joyful, like-minded enthusiasts and the rest of the adventure will unfold in front of you as you watch the race and follow the caravan to the next stage of The Tour. It’s really that simple.

A typical scene along the route

Car or camper van — either one works!

There will be good shwag, great food, priceless opportunities to ride the stages if you bring your bike, an amusing caravan of sponsors before every stage and the daily chance to be within reaching distance of the world’s top 200 elite cyclists. Listen for the helicopters and you’ll know they’re approaching. Ring your cowbells as they cruise past you or display your patriotism as you run alongside — participation is up to you, just try not to spill your beer! 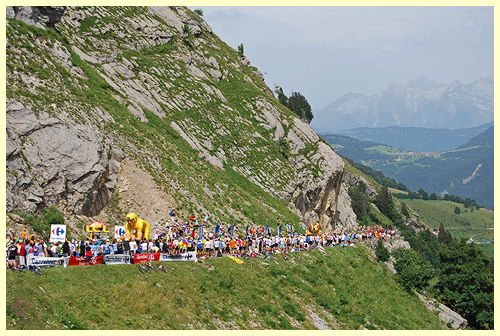 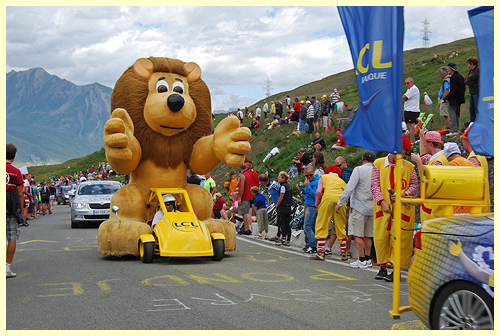 The lion, symbol of The Tour 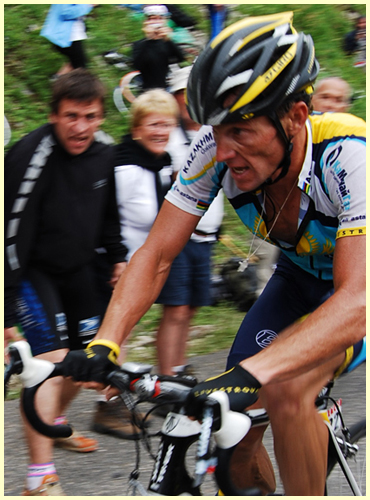 The peloton following Contador, Armstrong and the Schleck brothers

Mr. Producer, flying the California flag while he drinks a beer

When the High Alps are over and it’s time for The Tour to head to Paris, return to Geneva and ditch the rental car. Hop a quick train to Paris and check into your hotel a night or two before the race arrives on the Champs Elysée. Eat and drink copious amounts of wine, cheese and French food at the adorable sidewalk cafes as you wait for The Tour to arrive. On the final day of the race, get out early to enjoy breakfast and walk around central Paris on one of the few days when its main thoroughfares are closed to traffic, and The Greatest Annual Party in the History of World Sports culminates after seven laps on brutal cobblestone streets.

Touring with The Tour is like taking a great novel on vacation with you… heroes and villains, egos and underdogs, triumphs and tragedies. The Tour is a living, breathing, dramatic story of strategy that unfolds across hundreds of kilometers during which weather, illness, doping, crashes, climbs, descents, ethics, controversy, exhaustion and plain old bad luck can and will affect all of the riders in the race. The Tour is life, on two wheels, for three weeks, during which you will party, eat, sleep and repeat amidst some of the most breathtaking scenery in the world. If you like this sort of thing, you’ll love touring with The Tour.

Did I mention it kicks off in Liège two months from today? Yes, that means you still have time to book your ticket, plan your route, pack your bike and GO. It really is that much fun, and there’s even this to look forward to at the very end: