Daily Posts: Adding a bit of light to the darkness as we get through the pandemic together.
This series features travel photos from my archives, shared with you as we shelter in place.

It’s summit day! Our journey into the Himalayas culminates on top of Kala Patthar at 18,200 feet (5,547 meters) where we encounter a clear view of Mount Everest.

The starry sky I describe near the end of the post still sticks with me as a moment I’ll never forget. We’re so used to staring at stars and planets as tiny highlights in the sky. Yet being in such remote darkness in the Khumbu Valley, the sky took on a depth I’ve never seen before. In the solitude of the night, I was suddenly accompanied by thousands of points of light, near and far, in luminous, dimensional space.

Tomorrow I’ll share some of the out-take photos that weren’t included in this (re)post series. 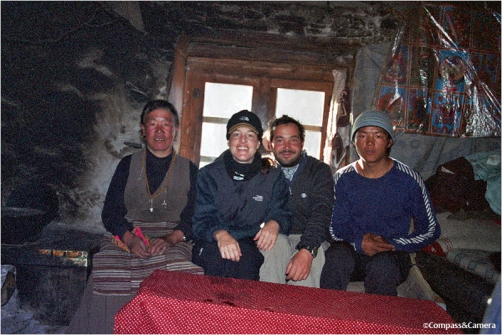 After seeing Mani Rimdu and an enjoying an overnight stay near Tengboche, we trekked farther up the Khumbu Valley toward Dingboche. The terrain relaxed into high altitude farmland, where rock walls delineated plots of land used to farm buckwheat, barley and potatoes. It seems unlikely that at 4,300 meters (14,000 feet) there would be much of anything worth farming but the bounty from these three crops sustains the families in the region as a source of both food and income. Black barley, in particular, is well suited for growing at Dingboche’s unique altitude and Sherpas regard barley from here as the finest available — even divine, as the local god of barley resides at a nearby peak called Cho Polu. (You can read more about Khumbu farming here.)

After a few hours hiking through the valley, we reached the far edge of Dingboche where Ashish arranged our accommodations for the evening. The cold shadows of the afternoon were setting in and we pitched our tent in the front yard of the home of a Sherpa woman. She was in her fifties, lived alone and had four grown children,one of whom paid her a visit the next morning. She welcomed us inside the stone and mud hut where we warmed up next to a stove while she and Ashish exchanged pleasantries. After a few minutes, and with a twinkle in her eye, she pulled out an enormous plastic jug from under her bed: raksi — the local home brew and the byproduct of Dingboche’s grain farming. We toasted and tasted, and thanked her for her hospitality. 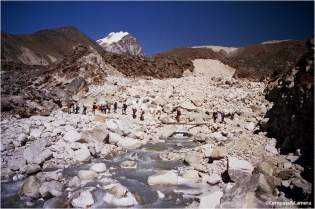 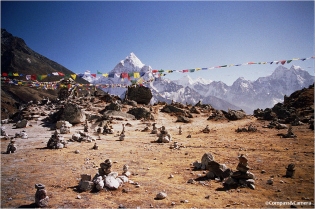 Departing Dingboche the next morning, the valley lifted higher and turned slightly west with the promise of the world’s highest peaks not too far away. We crossed the Khumbu Khola to a plateau filled with monuments to world-famous Sherpas and climbers, and strings of prayer flags tattering in the wind.

It is a strange, even lonely sensation trekking into the majesty of the remote Himalayas. It is nearly silent from land to sky, with only the wind and your footsteps accompanying you. Your relationship with nature and desire to see the world become the motivating forces pushing you deeper into the isolation. Otherwise, why would you be here? Purpose becomes singular, grandeur becomes visible, and the magnitude of what you’re about to see builds into a tidal wave of anticipation. Finally, the trail rounds a bend and drops into the last stretch to Gorak Shep. Pumori, the perfect peak of a child’s drawing, sits to the left and the serrated edge of Nuptse cuts into the sky on the right. You have arrived.

Pumori to the left, Nuptse to the right, J in the middle

We pushed on, now above 4,500 meters (15,000 feet) but still in the valley. Over the next kilometers the well-worn trail dissolved into the sandy basin of the Khumbu glacier, the world’s highest. Its path marks the movement of water, ice and rock over thousands of years. Listen closely and you might even hear it moving. When I was here in 2000 I spent three mesmerizing hours sitting and listening to the brittle snaps and pops of the Khumbu glacier’s noisy neighbor — the Ngozumpa glacier over Cho La Pass near Gokyo — while every now and then seeing rocks fall and dust fly as the glacier moved down the valley, inch by inch.

We picked our way through the rough and rocky terrain and arrived at the overlook to Gorak Shep — the farthest campsite of our trek.

The glacial valley of the Khumbu 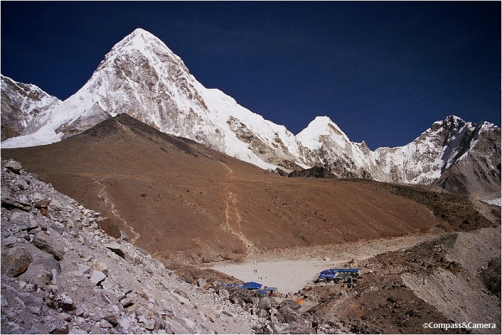 Everest Base Camp somewhere at the foot of the Khumbu icefall

It was high noon. Sunshine blasted over the moonscape of Gorak Shep with a dry, intense heat reminiscent of Arizona. We pitched our tent and made our decisions about what to do with the afternoon. I rested for tomorrow’s final climb to Kala Patthar (Black Rock) — the dark, dusty peak below Pumori in the photo above. J and a couple of Sherpas pushed on to Everest Base Camp in a six-hour round-trip hike, returning after dark exhilarated and exhausted.

With the sun down, temps dropped quickly. We settled into our sleeping bags around 8:00 p.m. and found our night in the Khumbu both eerie and magnificent. With clear skies and no wind, complete silence surrounded us. But less than an hour into our sleep we heard the rumble of an avalanche on the other side of the glacier. Near midnight, I laid in my sleeping bag fearing the frigid cold and heart-pumping conditions of a trip to the toilet tent at the breathtaking altitude of 5,000 meters (16,500 feet). But as I emerged from the warmth of our VE 25 tent, I was rewarded with the gift of the most beautiful starry sky I have ever seen. Shivering in my fleece jacket and tights, I savored a sight I may never see again in my lifetime. 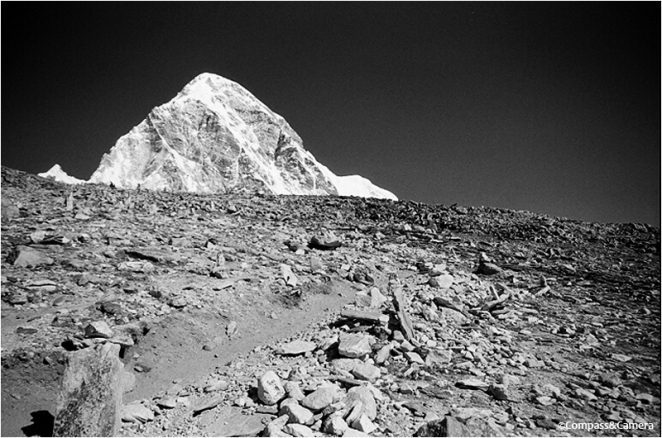 Trail to Kala Patthar with Pumori in the distance 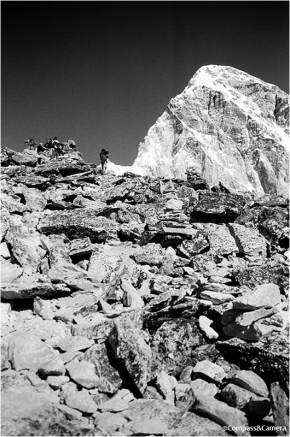 Scramble to the top

We started the hike to Kala Patthar at 4:00 a.m. the next morning, hoping to reach the summit before sunrise above Everest. The trail to Kala Patthar is not kind — it hits you with a severe slope and series of false summits just when you’re most exhausted and wanting to get to the apex of your journey. But we soldiered on, with adrenaline and desire pushing us up the final scramble to the top, at 5,500 meters (18,200 feet).

Mount Everest and Nuptse before sunrise

Mount Everest and the Khumbu Icefall 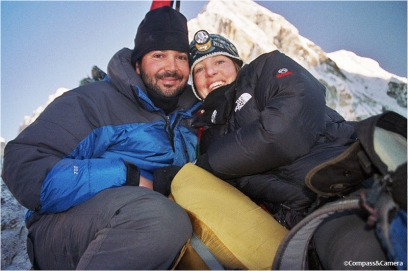 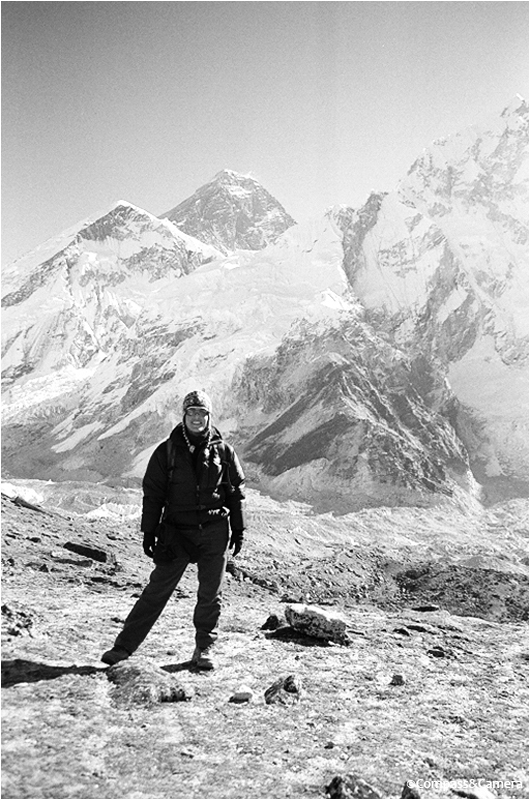 The world at our fingertips

We beat the sun, arriving in the shadow of Mount Everest and Nuptse, with Lhotse hidden behind. We unfurled our prayer flags, and J tied them up and let them speak to the wind in memory of his brother Gary.

It’s a hard feeling to describe, sitting on a rock regarding Mount Everest as the sun rises in the Himalayas. We felt a sense of achievement, a bit of relief, abundant awe and gratitude, and a lot of just … happiness. This world can be so scary, so fast moving, so out of control, so easy to despair over. But for a moment in our life, the world was none of those things. It was pure and simple. We walked. We saw the biggest mountain on Earth and it was beautiful.