Repost of the Day: Wanaka Heli-Ski

Posted on August 10, 2020 by CompassAndCamera 11 comments

Fire on the mountain

Safety briefing at the heli-pad

Wanaka, we have lift off!

We’re back in Wanaka, New Zealand for today’s armchair adventure with J. He’s taking us on a virtual heli-ski trip in the Crown Range in this repost from August, 2013.

Monday morning was relatively sunny with dissipating fog so J and his good friend X received the “let’s go” phone call at 8:00 a.m. Like two kids on Christmas morning, they excitedly packed up our rented Toyota Prado and we piled in to start the adventure.

After a glorious drive through the awakening sheep and hills of the Wanaka countryside, we arrived at the hangar housing the helicopters. A 15-minute safety briefing informed the skiers of the imperative dos and don’ts of heli-skiing. Wow, I wasn’t even going on the trip but I was feeling slightly nauseous at just seeing the copter and hearing about the potential dangers. Go ahead, call me a chicken, but I wanted J to scope it out and report back before I would willingly point my tips off piste and slide from the top of an untouched mountain.

The safety briefing concluded so we all moved further down the road to a flat, grassy field where the helicopters would pick up the teams after another briefing on avalanche beacons. There hadn’t been recent snow, but that doesn’t count for much in calculating the probability of an avalanche. Snow slabs can melt, break free and slide down the mountain even amidst seemingly perfect ski conditions.

Skis were prepped and equipment was checked. The sun, fog, and surrounding mountains made for a dramatic scene when we heard the approaching WHOP, WHOP, WHOP of the incoming helicopter. The guide stood in red, arms raised in a V, signaling the landing zone. J and X crouched low, ducked their heads and waited for touch down. The door swung open and one-by-one the team packed into the glassy interior. With a quick wave goodbye, the helicopter lifted from the ground and turned sharply toward the mountains. Within seconds the overwhelming rush of air and energy had evaporated like the fog into the clear blue sky. The tiny, shiny speck disappeared against the blue-white snow of the awaiting challenge.

Five runs were made before bad weather cut the day a little short and lingered for the rest of our stay. Not a problem — safety, first tracks, exhilaration and some life-long memories were achieved. 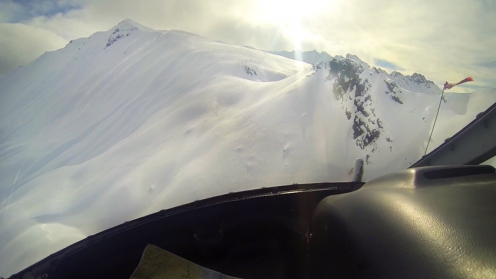