Posted on September 15, 2020 by CompassAndCamera 19 comments

A hand-carved sign welcomes us to Ek Balam, above an open gate to a wide dirt path leading into this Mayan site from the Pre-Classic and Classic periods (700-1100 AD). Mayan sites were often developed over centuries, with one structure built on top of another, extending their timeline beyond one period. 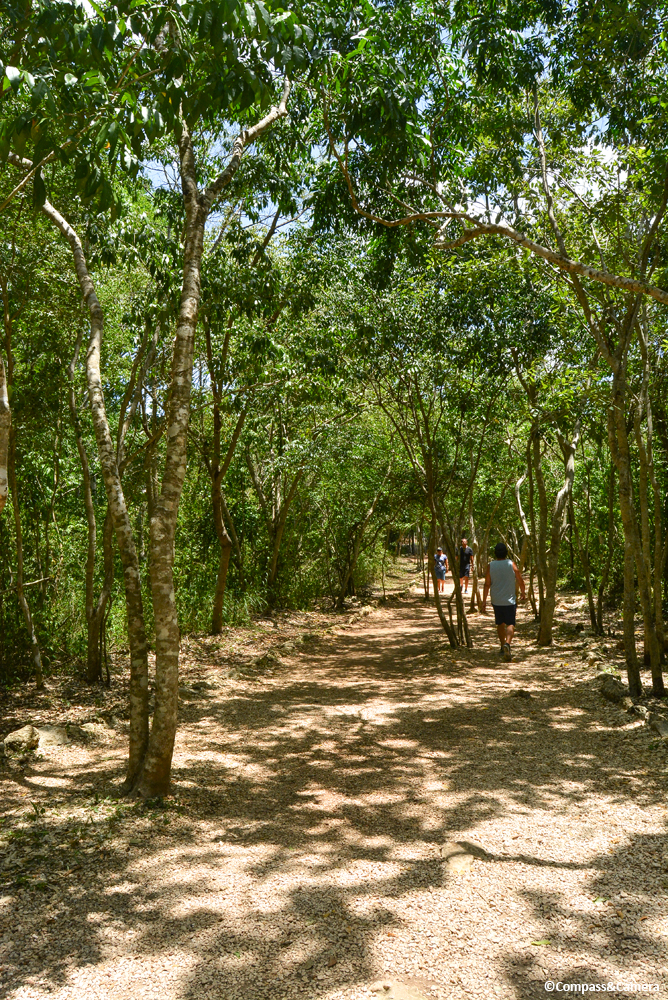 The path we’re on seems simple enough; wide and worn from countless footsteps. But this is a sacbe — the remnant of what was once a Mayan road, cleared of vegetation and built about 18 inches/45 cm above ground level, presumably to even out the irregularity of the jungle terrain.

Sacbeob (the plural form of the word) lead to all of the larger Mayan sites, Ek Balam included. There are two of them here which terminate at the crumbling stone walls surrounding the site. Sacbeob were a feat of engineering, not only because they were built through dense jungle but the stone used to build up and elevate them would have required a huge workforce and a lot of hours. There is also evidence that sacbeob may have been covered in stucco, rendering a smoother surface for whatever or whoever was traveling upon them. 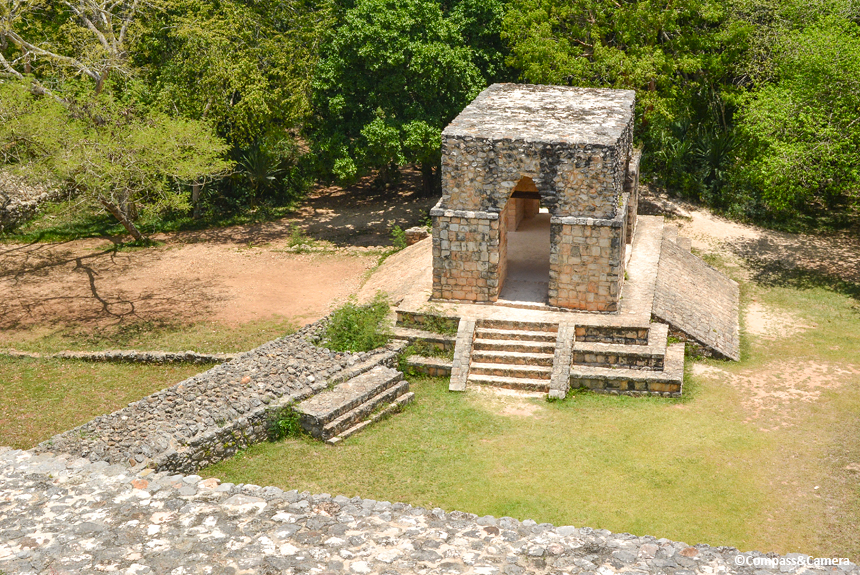 Ek Balam’s entry arch is interesting for its angularity — not nearly as elegant as Roman versions that appeared centuries earlier, but still a striking shape in negative space at the entrance to the site. Perhaps there were torches and guardians at this outpost of Ek Balam. 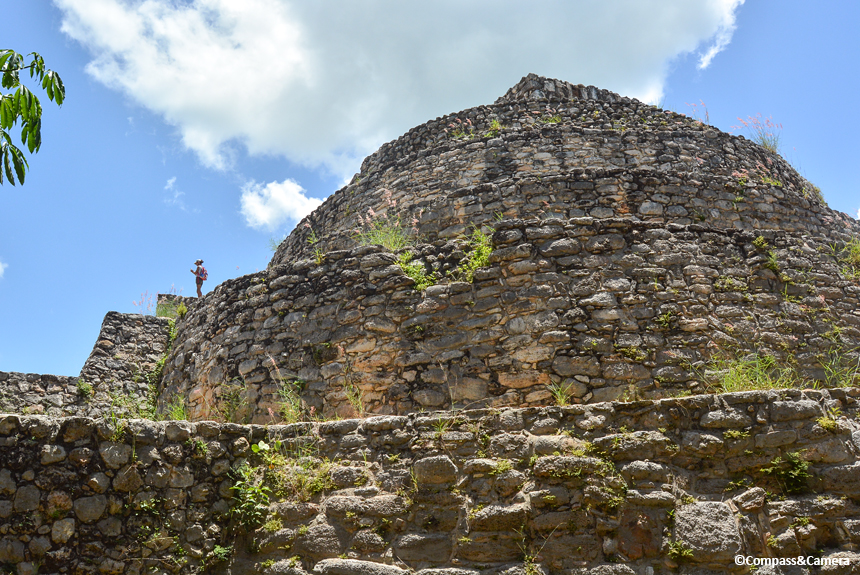 Wood lintels above doorways of the Oval Palace

An elevated stone path leads to the Oval Palace, built like a tiered wedding cake with graduated round forms leading to the temple at the top. At ground level, a series of doorways leading to rooms in the palace have perfectly cut heavy timber lintels supporting the stone above them. The tools and methods of construction used throughout the site are impossible to know completely, but craftsmanship is evident everywhere.

The Twins and acropolis beyond

From the top of the Oval Palace, we see “the Twins” to the left in repeated forms with separate staircases leading up to elevated interiors under decaying roofs. King and queen? Brother and sister? No one knows for sure who used these duplicate structures but there are several rulers named in the carved stelae across the lawn from the Twins. 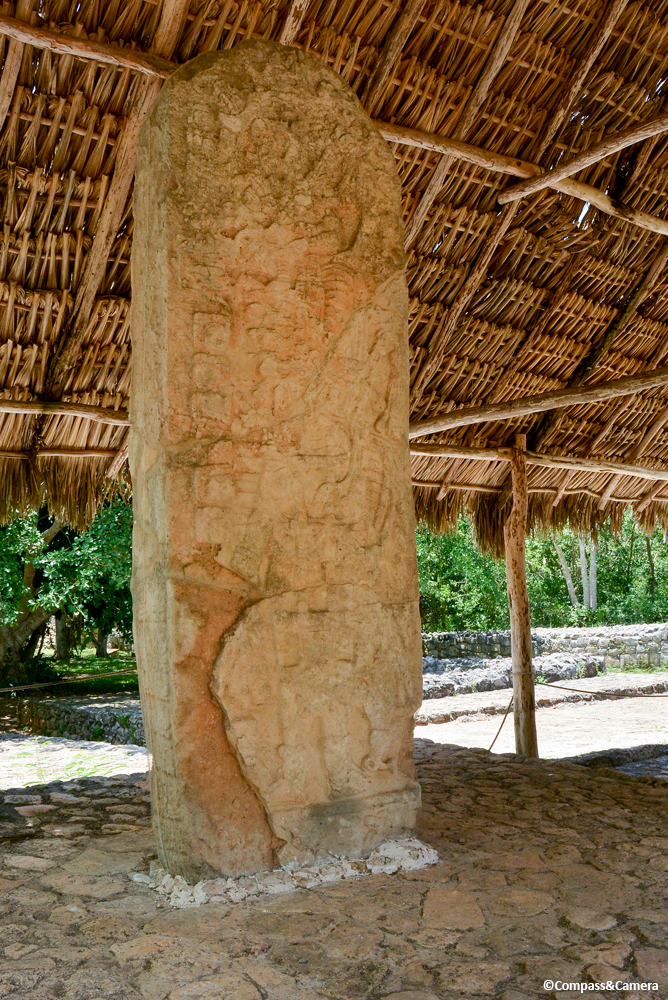 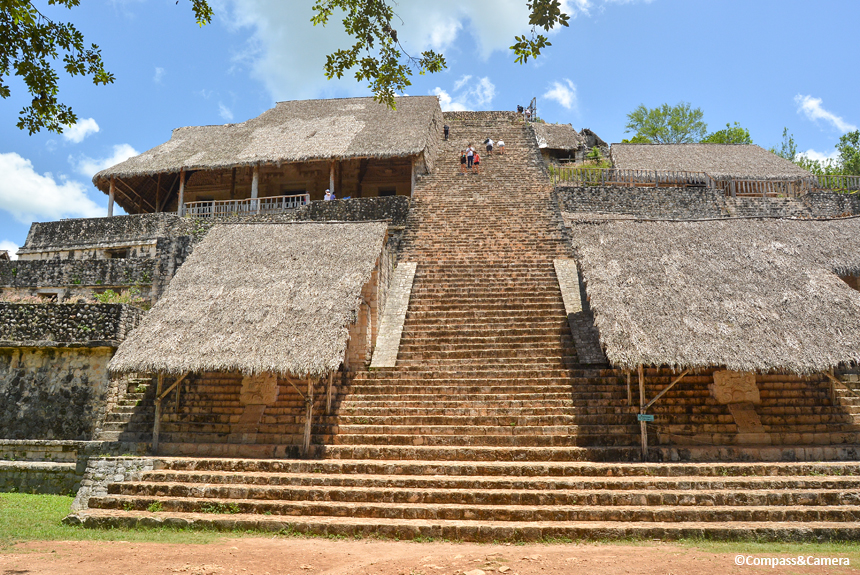 North of the Twins, Ek Balam’s acropolis towers over the site in a six-story form around an ominous staircase of 106 steps. Mayan staircases run at a 45-degree angle — a bit steeper than the 37-degrees we’re used to. The steps are shallow as well, indicating that people living in the region were likely of smaller stature than today.

Stairs of the acropolis

Standing at the base of a Mayan staircase is intimidating — muster your endurance, focus your attention and know that any misstep can result in an express route to the bottom.

The descent at Ek Balam

View from the acropolis

From the top, the smaller structures of Ek Balam peek out from the landscape of endless jungle canopy extending to the horizon. It would be impossible to know if an enemy were approaching under the beautiful green blanket of foliage. Maybe then this acropolis was less about what was below and more about what was above — sky, stars, sun and moon, and the Mayan deities that influenced everyday life.

Ek Balam’s most notable feature sits under a thatched roof about halfway up the staircase. An elaborately carved stucco frieze adorns the wall of an interior chamber that was the tomb of Mayan ruler Ukit Kan Le’k Tok. The frieze is designed as the mouth of a deity with fangs jutting out from the lower platform. This is the only stucco frieze found in Mayan civilization so far.

Upon seeing the frieze I thought it was a recent work of art but its near perfect condition is due to it being behind stone walls until they were recently removed. I have to say, with climate change affecting the region more and more, I fear for the frieze being only somewhat protected at a high elevation. Hurricane-force winds could take the roof right off, leaving the frieze entirely exposed.

The finishing touch of this unique stucco frieze is the winged “angels” standing at the top — the only angels of known Mayan history. I would speculate … maybe these are The Twins? The reason for the duplicate structures? Maybe twins were an auspicious sign in Mayan culture; a rare gift from the gods; winged like sacred quetzals. We may never know for sure and that’s what’s so intriguing about Ek Balam and its cultural artifacts of Mayan history.

One thing we do know for sure is that the Mayans loved their ball game. Ek Balam has a nicely scaled court with angled side walls. The stone hoops have been lost to time but surely there were some spirited games here centuries ago in the land of the Black Jaguar, Ek Balam.