A Tomb with Good Bones

Posted on September 26, 2020 by CompassAndCamera 4 comments

Today we’re taking our last look at Chichén Itzá, at the Ossuary or Tomb of the Great Priest.

This structure is smaller than the Temple of Kukulcan but equally captivating in its balance and form. As we often say about well-designed houses, this place has “good bones,” in more ways than one.

Built of seven layers and superimposed over previous structures, the ossuary’s four staircases are flanked by stunning serpents with open mouths resting at ground level.

Human bones and funerary offerings have been found in a cavern underneath the tomb, reached by an interior staircase. In front of the ossuary, a round stone platform would have been used for dances and ceremonies. 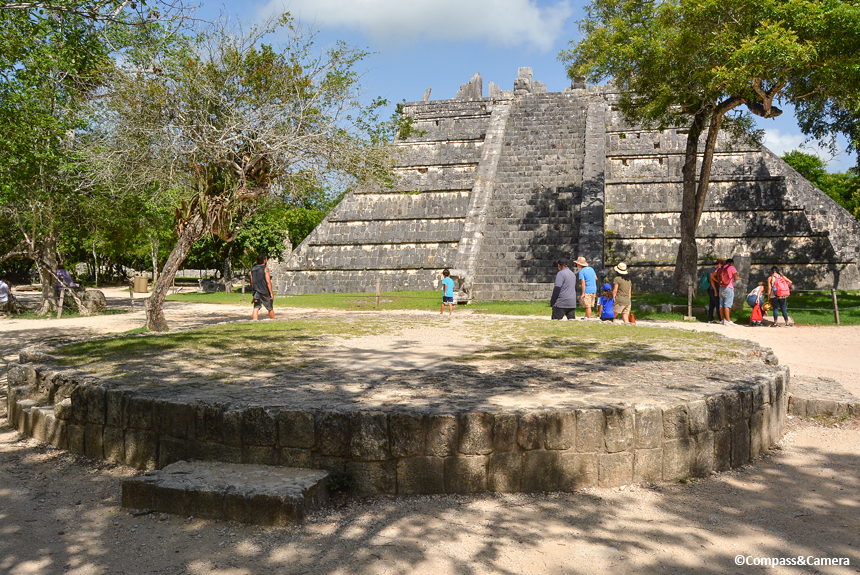 Platform for dances or ceremonies

After all these posts about Maya civilization, I’ve only barely scratched the surface of deep history, rich culture and intricate sites around the Yucatán Peninsula. When travel resumes eventually, I hope to visit Teotihuacán and bring you more pieces of the puzzle related to the interaction of Maya and Toltec peoples. There is fierce debate about their influence on one another but a syncretic aspect of their relationship is evident in Chichen Itzá’s many depictions of the feathered serpent Kukulcan, also known as Quetzalcoatl.

Tomorrow… something small and sweet from a foreign land.

Photos of the Day: Adding a bit of light to the darkness as we get through the pandemic together. This series features travel photos from my archives, shared with you while staying close to home.